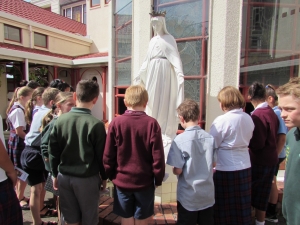 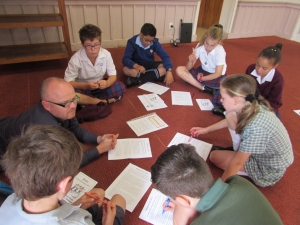 On the 16 of February, seven companions and I went to Connelly Hall at for a young leaders’ workshop, where we were greeted and taught by Mr. Alan Grant.

We started with a prayer for good leadership, after the prayer we began our day by relaxing our minds by colouring in a mandala for five to six minutes. This was followed by leading a partner by helping them trace certain shapes on a sheet of paper blind folded, this was a great example for leadership.

After this we heard the Magpie’s Tale which was a story from the Bible retold for children. The story was about Zacchaeus an unfair tax collector. After a great and moral story we had morning tea. We continued our learning by writing down A to Z attributes for young leaders of a Catholic school.

After this Mr Alan Grant gave us a leaflet about a visit to sacred Heart Cathedral. After the visit of the Cathedral we retuned for lunch at the hall. When lunch had finished we chose groups for a presentation. The groups were, proclaiming the word, dramatizing the gospel reading, prayer of the faithful and liturgical dance.

After this we had prayers and went back to our school, this was a great experience for us and we have learnt some great ways to be a great leader. 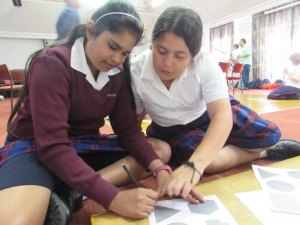 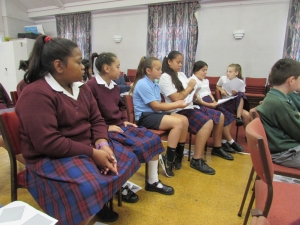 On the 16th of February 2017, seven of my classmates and I went to young leadership workshop in Connelly Hall at Sacred Heart School. There we met Mr. Alan Grant who was in charge of teaching us. We met so many kids from different schools. Ms. D’Souza was with us.

We started by saying a prayer. Then we went off colouring a Mandela picture. After that we had to partner up with someone and trace over shapes on a paper by closing your eyes. The only way you knew where you’re tracing was by the direction your partner was telling you to go. This was good practise for leadership because you need to trust your partner that they are leading you in the right way.

Next, we had to write down A-Z words describing a leader. After that we listened to Mr. Grant reading a book called the Magpie’s Tale. It was about a magpie and his point of view of the story Jesus and Zacchaeus. Then we had morning tea. After morning tea we had a look at some effective leadership. We used examples like Jesus Christ, Pope Francis and Cardinal John Dew. After that we played Family Feud. We had to write down 20 things you might find in a Catholic Church. Then we explored the Sacred Heart Cathedral.

Later on we got to choose which group you wanted to be in. There was Proclaiming the word, Prayers of the faithful, Liturgical dance and Dramatizing the Gospel reading. I was in the Prayers of the Faithful. We had to write 4 different prayers. One to the church, one to the local, national and world leaders. One to people who are in need as well as one to our community and family. Then we had lunchtime. After lunchtime, we had to read out our prayers.

We then did some more colouring in and finally finished off with a prayer. It was a really great time with different kids. I had so much fun. 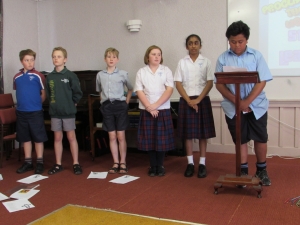 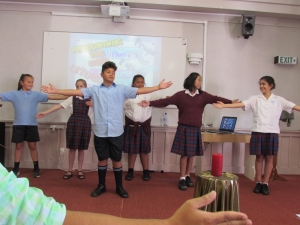 About the Author: Fiona D'Souza